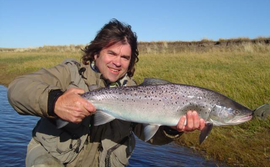 In 1996 I was barely 22 years old when I started my career in advertising.  I worked for a company called FCB direct, which was owned by a holding company known as True North Communications.  No offense to Brian Rafferty, my boss at the time, but the job kind of sucked.  I was estimating call volume for a large telecommunications client who was using long format commercials to advertise their One Rate calling plan.  My primary task was to calculate the estimated number of calls the client’s telemarketing center could expect to receive after one of these commercials aired. We had to know the gross rating points of each program that the commercial was aired during and then provide estimates back to our client so they could staff up their telemarking center with the optimal number of representatives.  I was commuting into NY and still living at home with my parents and barely making enough money to get to and from Manhattan.

Then one day in late 1996, a memo came across my desk announcing that True North “did a deal” with a digital agency in Westport, CT called Modem Media.  I went to their website and knew that I needed to work there.  In early 1997 my wish became a reality and I was hired into Modem’s Research Department.

The years I spent at Modem were the best of my career. I worked hard, I played harder, and I was fortunate enough to meet some really great people.  Recently, there was a party held in Westport to celebrate the 25th anniversary of Modem Media.  A great time was had by all! At that party I caught up with one of Modem’s co-founders, GM O’Connell, and asked if he would be a guest on this podcast.  He said yes and we met the following week at his home in Connecticut.

We chatted about what led up to the start of Modem Media and what the early days were like. We discuss growing pains, lessons learned, and life post Modem.  I enjoyed our chat and hope you do as well.

One apology to make up front, we did the interview outside as it was too nice a day to stay inside. As such, from time to time, the wind makes an appearance on this recording (I have since purchased a wind guard for my recording unit).  We had this conversation over a bottle of Silver Oak Cabernet and I suggest you uncork a bottle of the same as you listen to this; it will take your mind off the wind!